In Part 1 of our post, we discussed how application layer protocols use a transport protocol internally and implement data transfers without the users’ knowledge of the details underneath it. TCP or UDP (Transport Layer Protocols) implementation

In case you want to catch-up or read the previous post in the series, here’s a link Click Here.

In Part 1 of our post, we discussed how application layer protocols use a transport protocol internally and implement data transfers without the users’ knowledge of the details underneath it. TCP or UDP (Transport Layer Protocols) implementation would only transfer one packet at a time, while the actual transfer of users’ data would certainly take up a lot more packets. Whether a user is transferring a file or a stream of data, it would still take some wrappers to package them into datagrams to prepare for the transfer. Usage of a transport layer protocol necessitated the users to build programs that would keep the status of transfer, a live connection, handshakes of control data between client and server, and the transfer of the actual data. As the usage of transmission protocols rose, the user community started to realize they were using the same tool for different use-cases. Some use-cases were carrying critical data that needed confirmation, while some carried data that is only critical within a certain amount of time. Sometimes, there was a large amount of data that needed to be transferred, other times, only a handful of signals were enough.

FTP is a protocol that uses TCP for the actual transfer. FTP implements the file transfer using two TCP connections under the cover. While one connection is used exclusively to transmit and receive control information, the other is used for the data transfer.

In the current age, users transfer data through a multitude of Graphical User Interfaces (GUIs) that masks almost everything that happens underneath it. You would probably not realize that an FTP protocol was used at all. In the screenshot below you will find how early users of FTP protocol operated, and following the screenshot is a step-by-step process that FTP, as an Application Layer Protocol, orchestrates the transfer. 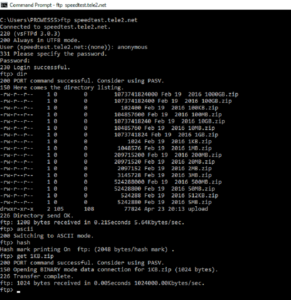 As I typed in the command to start an FTP session, ftp speedtest.telet2.net, the following steps would kick-off behind the scenes

The illustration above is to drive home the point that an application layer protocol’s implementation, by the nature of its abstraction, stitches together a functionality that makes life easy for a developer. In this case, the FTP implementation had to go through multiple stages of the transfer, and it abstracted the actual implementation by taking simple commands from the user.

While each application Layer protocol serves a specific purpose, it helps to understand how each of these fit into Systems Integration needs. Sometimes these protocols differ by the purpose they serve and sometimes they differ by the quality of service they provide. Some are good for interoperability, support Open standards, while others are good at security. In fact, there would be more than one market vendor that implements the same protocol but differs in the add-ons they provide to their customers. We at Prowess can help you remove the clutter to find the right fit for your needs.

In our next post, we shall go beyond the underlying protocols and discuss the messaging systems that are available in market and delve into them.